Back in January we told members about the formation of a Swedish Conversation group to meet on a weekday evening at an Edinburgh cafe or pub.  This proved very successful, but unfortunately had to suspend its operations following the lockdown.

It is now re-starting with video meetings.  The first of these will take place on Tuesday 23 June at 20:00.  If you would like to join, please use this link to email angus.mccarter

In the light of the Corona Virus epidemic the Committee has decided that this year’s AGM should be cancelled.  We very much regret this, but it seems to be the only sensible thing to do in the circumstances.

An email has been circulated to members giving further details.  Let us know if it has not reached you.

Here are the details of the Church visit to Edinburgh in February:

An English-speaking member who is wanting to improve his Swedish has suggested that it would be useful to set up a Swedish conversation group. The idea would be to meet on a regular basis for a general and informal chat in Swedish, perhaps with one or more fluent Swedish speakers to help people along where needed.
Quite a number of our existing regular activities take place during normal working hours, but the idea here is to find a time that allows people at work to come along.  Perhaps a weekday evening in a pub, for example.  It would take place in Edinburgh.
We undertook to sound out members to judge the level of interest. If you think this could be something for you, please let us know by email to: membership@scottishswedish.org  We will pass on all responses.

The next Edinburgh Coffee Mornings will be as follows.

There is a coffee morning every month.  If you email Kerstin Phillips she will let you know future dates and where the hostess lives.  info@scottishswedish.org

On 22 and 23 October. the University of Edinburgh is arranging an important conference entitled “Nordic Branding and the Reception of the Nordic Model”.  The closing address on 23 October will be given by Hallgrimur Helgason.

Full details are available in the conference booklet, here:

Everyone is welcome to attend, either the whole conference or just the closing address.  It is free.  Tickets are, however, required and can be obtained by following these links:

We have just received the letter below.  Despite the short notice these concerts may be of interest to members.

My name is Paul Anderson and I’m a traditional Scottish Fiddle player from Aberdeenshire. At the moment I have the leading Swedish Nyckelharpa player with me doing series of concerts featuring traditional music from Scotland and Sweden called “Music of the North”. We’ll be performing at St Columba’s Gaelic Church on St Vincent Street in Glasgow tomorrow night [that is Wednesday 9 October] and at the Kirkcaldy Acoustic Music Club on Thursday night [10 October]  It never occurred to me to get in touch earlier but do you think any of your members might be interested?
Peter whom you may well know or have heard of has been a key figure in taking the Nyckelharpa from near extinction to a point where there are over 10,000 players in Sweden now. He’s been a two time World Champion, performed at Swedish Royal weddings, performed with Benny Anderson’s folk group and is one of only 20 people to have been awarded the gold Rikkspeilman medal (folk music laureate).
Thank you for your time and I look forward to hearing from you if you have any questions.
The website is :
http://www.paulandersonscottishfiddler.com

It may be around 600 years since anyone attended a service at Hvalsey church. Even if you are in a hurry, and I wasn’t, the journey to this outpost of Nordic life still takes a little while.

So I set off from Scotland for some days of travelling. The first was on a large jet plane full of visitors going home to America but, in the middle of the second day, I arrived with 30 or so others on the twice weekly little flight to the nearest airport. The sun shone from a clear sky, and a warm and persistent breeze blew from the higher ground. Low willow bushes covered the hill sides like grey-green fur. The ground was covered with a profusion of yellow, blue and purple flowers and icebergs glistened in the bay. 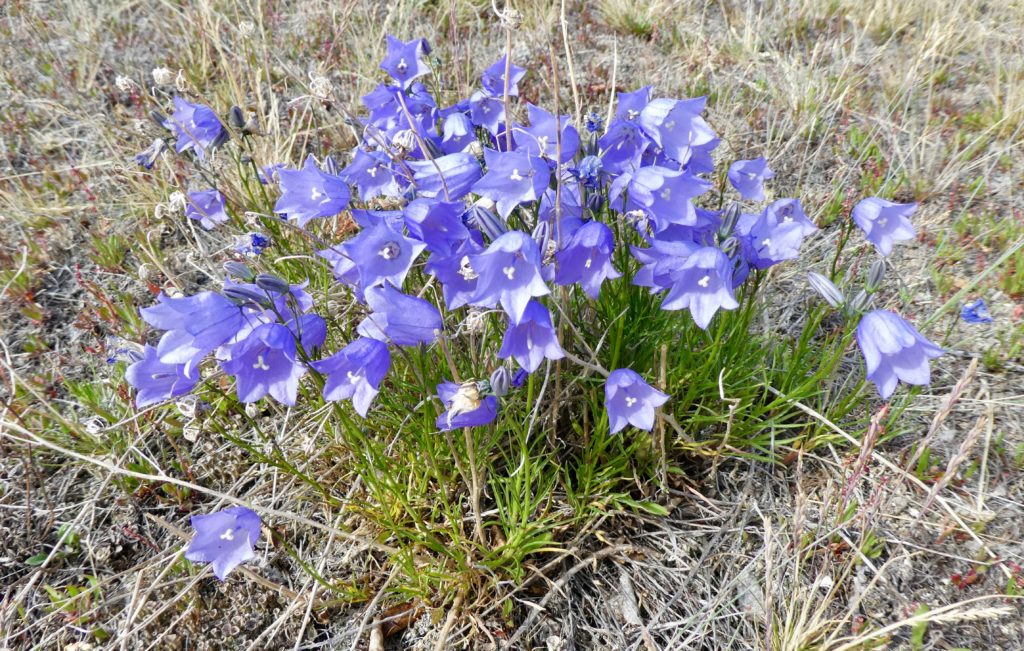 That night I spent near the airport and next day took a boat across the loch, for there is no road around it, to the small village on the opposite side. This is where, some 1,000 years ago, Eric the Red set up his farm and called it Brattahlid, though they now call it Qassiarsuk. It is set in an area of gentle slopes where it catches the warmth – sweet peas are to be found growing wild – and is now the centre for the area. There are three or four sheep farms. There is a well-stocked shop selling groceries and ammunition, a primary school and a dormitory as well as a bright modern church. Behind the village there are hay fields and some turnip crops. Scattered amongst all this, are the foundations of the Norse buildings. They must have been made of turf above a couple of courses of stone.  It is these stones that remain and that trace the outlines of the long house, the farm buildings and the original church. 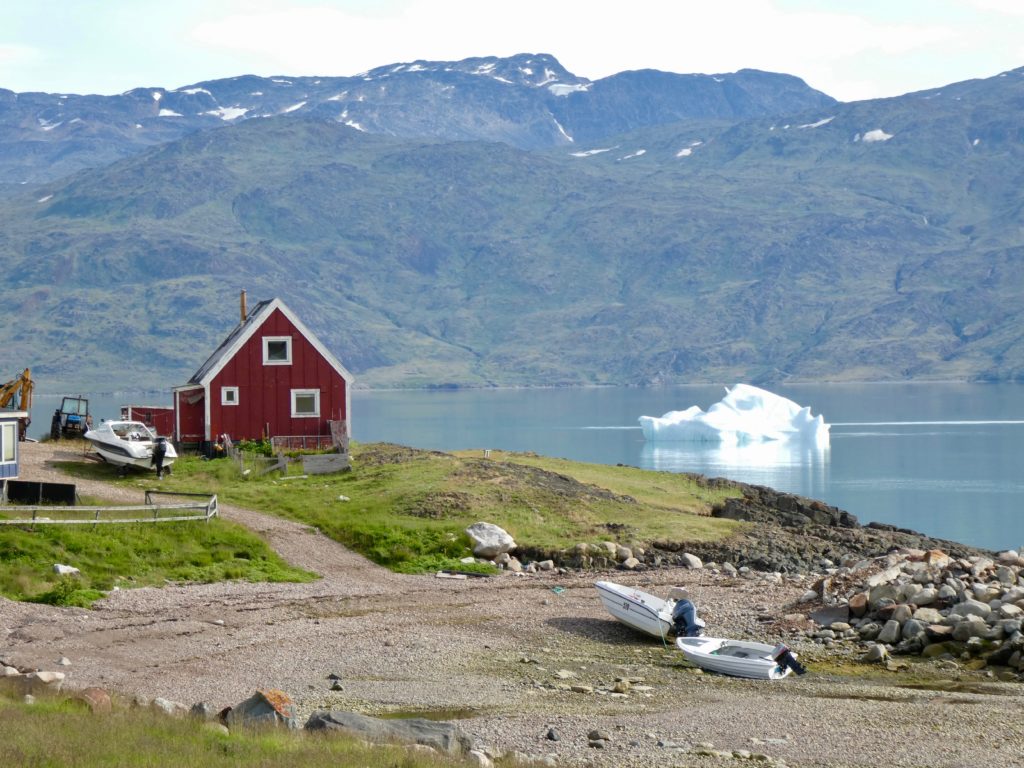 But, it was still a long way to Hvalsey. The slow boat, more of a miniature ship, takes around 5 hours to go down the loch to the small town of Narsaq. It is both a charming village of brightly painted wooden houses set under a steep and striking mountain, and something of an industrial centre with its abattoir and fish processing factory. We will hear more of it in years to come as the valley behind has strategic minerals which have attracted the attentions of the US and China.

The journey continued the next day on the regular boat to Qaqortoq.  In the second Nordic colonisation of Greenland this was known as Julianehåb and was a centre for the whalers, some of whose houses remain around the central square. A kayak regatta was in progress and later some of the participants were to be found celebrating. Their resilience had almost matched that of the children paddling and splashing in the sea while their parents watched the races. 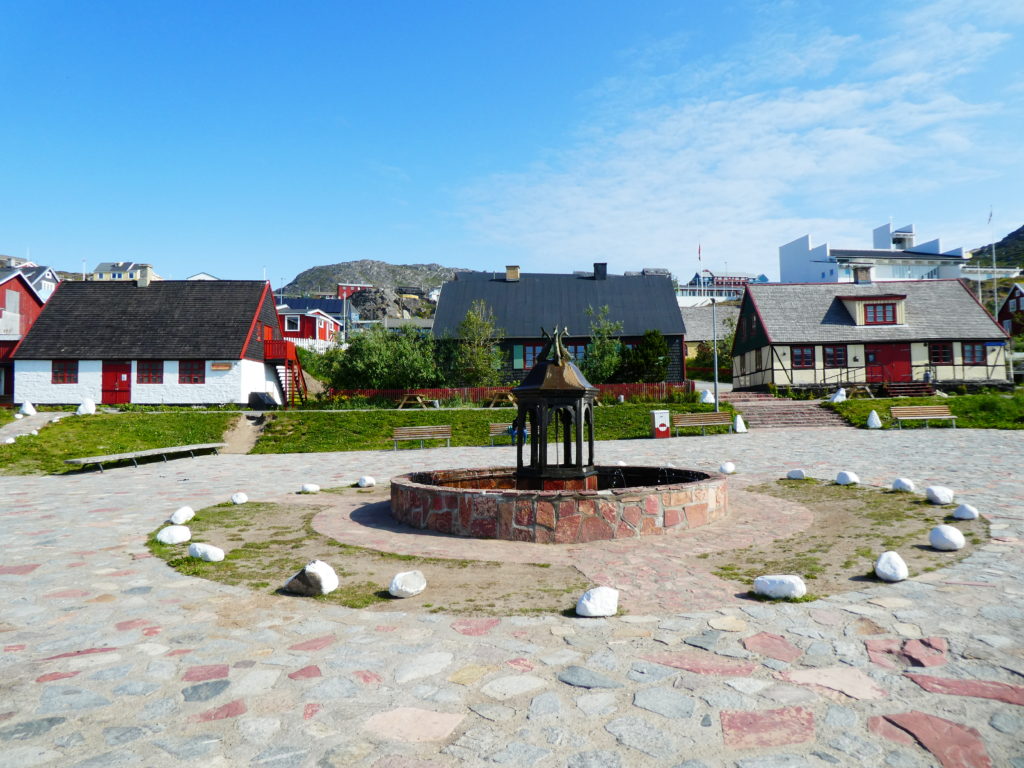 The next day was the final leg of the journey. Early on there was some mist but this had cleared during yet another calm, sunny morning. Dressed in stifling survival suits, the few passengers set off in a small rubber dinghy equipped with an enormous engine. It roared at a tremendous speed along the coast jumping between the crests of the, fortunately very small, waves. We weaved between the icebergs but then, after an hour or so, entered a large, ice-free bay backed by high, and surprisingly green, hills.  At the very head of the bay, almost hidden by a substantial island, stands the church. 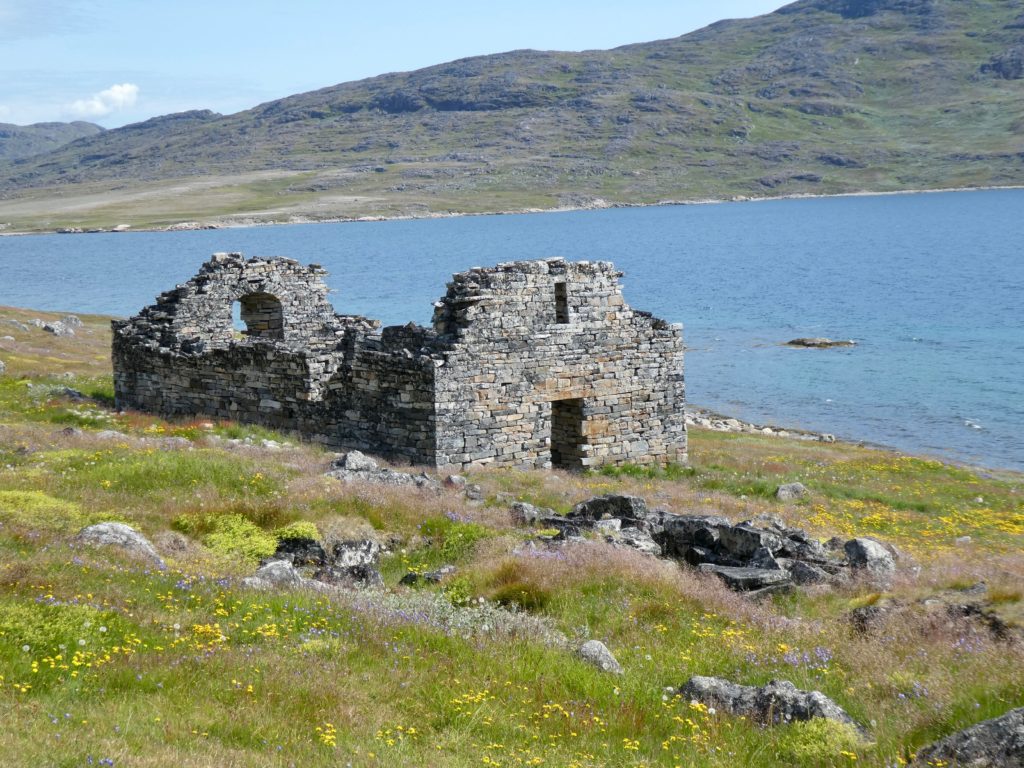 It is a modest enough building. A rectangle of thick dry stone walls, now entirely lacking a roof, set in flower filled grassland a few yards up from the shore. There is an arched east window, and a small west window above the door way, but it must have been a dark place when it was used. No tower nor grand pillars nor flying buttresses. It was built for the local people. Archeologists tell us there were maybe 30 farms in the neighbourhood and there are some traces of the main one close by the church. Despite its favourable position, only one small, isolated farm remains today some way off to the east.

They say that the last record of the old Norse colony in Greenland concerns a wedding here at this church in 1408. And then silence.